One thing that always gets me with our kids is their inability to communicate clearly. We have two that find it hard to communicate their emotions and a third that takes 10 minutes to tell you they want a game. Sometimes, it’s hilarious… other times… well it’s annoying. When they are upset and unable to communicate clearly, it’s heartbreaking. All I want to do is make it feel better but that’s not always an option when you don’t know what’s going on.

For our neurotypical kiddos, this gets better with age…. Or longer in our case hahaha. Our neurodiverse crowd, has a very different experience. They often find it harder to communicate as they get older, and a lot of that has to do with their lack of social skills. When they don’t have those friends to spend hours at a time with, they miss out on some great emulation techniques from their peers.

Plus, when our neurodiverse kiddos are frustrated or overwhelmed, communication just flies out the window. At least in our case, it’s like she just forgets how to communicate completely because she’s focused on keeping control of things.

During our Peanut Butter & Jelly project, I tested their frustration levels.. On purpose. I know, that sounds bad, but it was the best thing ever. These kids didn’t just give up. They didn’t decide that they couldn’t do it. With their peers they persevered. They showed up and took charge. This was a great communication activity for kids.

There were plenty of opportunities for each one of them to decide they were done. I mean, I was making them be VERY literal when we were doing it. (Need an afternoon laugh? Go check it out here). Sometimes, I was a bit too literal. All purposeful though. The more literal I made them go, the more they understood that directions aren’t always as clear as we think they are.

And when they got frustrated? The directions got even worse, which made every kid laugh. Not because their fellow squad member was wrong, but because the actions I was doing were pretty funny. I mean who doesn’t just stick their fingers in the peanut butter when told to spread it on bread??

This had to be one of my favorite rally points, because the kids came together and helped each other out. They worked out problems, laughed together and didn’t worry about being the kid to get the answer wrong. They just enjoyed having fun with their squad members. 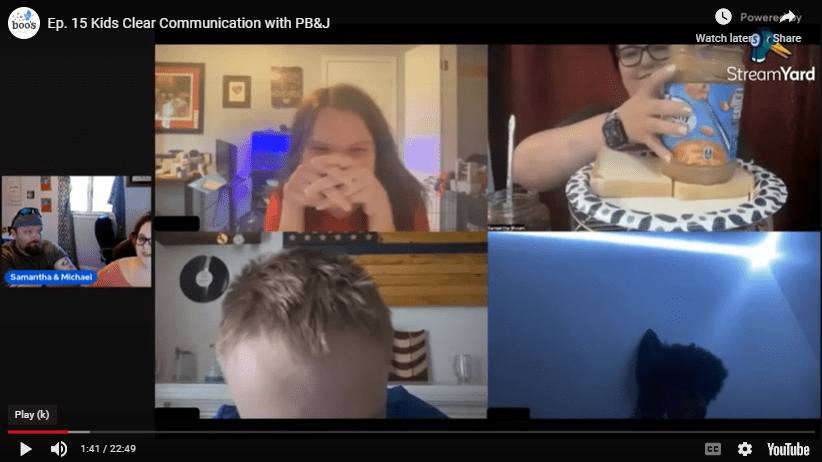